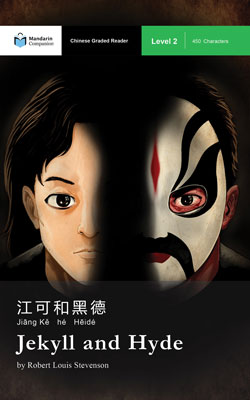 based on Jekyll and Hyde by Robert Louis Stevenson

After years of work, Jiang Ke (Dr. Jekyll) is on the verge of a breakthrough of his personality-enhancing elixir. When he crosses paths with his old flame He Jia, his focus diverts to reclaiming the love he lost. However, Jiang Ke quickly discovers he is not the only one vying for her affections. Is his untested elixir the answer to his problems or just the beginning of his troubles?

This novel is based on Robert Louis Stevenson’s 1886 novella, The Mysterious Case of Dr. Jekyll and Mr. Hyde, but also draws upon the rich evolution of that story over the years. Because the original work is told as a series of letters (much like Bram Stoker’s original Dracula) and also relies on a “surprise twist” at the end regarding the identity of Mr. Hyde, it was clear that some additional adaptation was called for, just as other versions of this tale have done in the decades since its original publication.

As in our other stories, this Mandarin Companion graded reader has been adapted into a fully localized Chinese version of the original story. The characters have been given authentic Chinese names as opposed to transliterations of English names, which sound foreign in Chinese. The locations have been adapted to well-known places in China.

The translation of the title is worth a mention because it is not the standard translation used in Chinese for The Mysterious Case of Dr. Jekyll and Mr. Hyde, which is typically translated as 化身博士(Huàshēn Bóshì), with the story’s titular characters’ names transliterated as 哲基尔医生 (Zhéjī’ěr Yīshēng) for Dr. Jekyll and 海德先生 (Hǎidé Xiānsheng) for Mr. Hyde. As usual, we went for our own Chinese translations of these names.

The name 江可 (Jiāng Kě), which we chose for Dr. Jekyll, sounds like a completely normal Chinese name, while also alluding to the “potential” for good and evil in our main character, one of the main themes of the story. Meanwhile, the name 黑德 (Hēidé) does not sound like a normal Chinese name, but makes sense for the warped character in our story. Note that 黑 (hēi) is not a Chinese surname, which is why the name is written in pinyin as “Hēidé” and not the two-word name “Hēi Dé”.

We hope you enjoy our version of this classic, and that your Chinese reading comprehension undergoes a much more positive (and more natural!) transformation of its own.

The following is a list of the characters from The Mysterious Case of Dr. Jekyll and Mr. Hyde in Chinese followed by their corresponding English names from Stevenson’s original story. There are, of course, other characters in the story besides these, but many do not have exact correspondences to the original. The names below aren’t translations; they’re new Chinese names used for the Chinese versions of the original characters. Think of them as all-new characters in a Chinese story.

Be among the first to write a review!