The Magic of Learning from Context

It has happened to all of us while learning Chinese: you are “attempting” to read a text in Chinese and then you inevitably stumble upon it, a black hole (a.k.a. an unknown character) and you’re instantly caught in its gravitational pull as it slowly sucks you in. Your eyes glaze over as you stare at it; it stares back at you like a spooky animal ready to pounce on its prey. You cycle through a database of possible pronunciations but absolutely nothing comes to mind. You can’t even attempt to pronounce it, and even if you did you’ve only got a 1 in 4 chance of getting the tone right. Nothing. You’ve got nothing. Sweat beads on your forehead, you start to scream, and your head explodes.

If this situation sounds familiar (minus the exploding head), fret not; you’re not alone. This is one of the things that makes Chinese so difficult. However, a fascinating study* published in Reading Research Quarterly offers insight into learning Chinese. The researchers studied how words are learned in context through reading, both by students in China and by students in the U.S.

A quick primer: learning words in context means being able to pick up the meaning of a word, term, or idea from the clues that are given in a sentence, paragraph, or article. For example, take the word “repugnant” in the following sentence.

You could see how repugnant the bitter medicine was by the way she shuddered and made a face as she swallowed it.

If you didn’t know the meaning of repugnant before, now you’ve got a much better idea. That’s because the context of the sentence gave you clues about the meaning. This is learning words in context.

Learning words from context is a universal phenomenon

The study found that both American and Chinese students are able to understand word meanings from context while reading normally. If you run across a word in a context that you understand, you’ve got a high probability of figuring out what that word means, even if you can’t say it. Even after controlling for cultural, family, educational, and language differences, the authors wrote “what is remarkable is not that there were some differences between Chinese and American children, but rather how similar the pattern of results is for the children from the two countries.”

What was even more interesting relating to Chinese, is how the individual components of characters, 部件 in Chinese, provide categorical information about the meaning of the character and often give a more transparent meaning than English. For example, the Chinese word for otter 水獭 has these two characters. The first character 水 is more commonly known and means water while the second character 獭 is more uncommon. However the character component 犭 conveys the meaning of a mammal or beast. Right away the reader can guess that this is some sort of animal, perhaps one that is amphibious. With the proper context the reader could probably guess this is an otter, since a native-speaking Chinese child may already know how to say “otter” in Chinese, and thus would now know how to pronounce both characters in the word 水獭.

“Knowing a Word” is not good enough for reading comprehension

You can do character flash cards? Great! But that’s only going to get you so far. A reader can improve reading comprehension if they can automatically recognize the words in a text. However, in order to build instant recognition of word meanings during reading, one must also have the opportunity to “meet” a new word repeatedly.

Interestingly enough, the study also cites that “knowing the definition of a word” is not enough for reading comprehension. In order to understand words correctly during reading, the words must be meaningfully used in context. When new words are integrated with existing knowledge, they are better understood and the new words move into the reader’s “comfort zone.”

This makes total sense. Basically, it’s easier to understand something when you understand everything around it. This is the precise reason the Extensive Reading Foundation calls reading at a 98% comprehension level the “sweet spot” for learning new words.

Children, in both China and America, who did a lot of out-of- school reading learned more unfamiliar words from context than children who did not do as much extra reading.

The study concluded that only extensive reading can simultaneously meet the three criteria necessary to effectively learn words from context and build large vocabularies:

It’s no wonder why extensive reading is so effective at building meaningful vocabulary development. If one has a large vocabulary and knows how to use it, isn’t that the same thing as fluency? 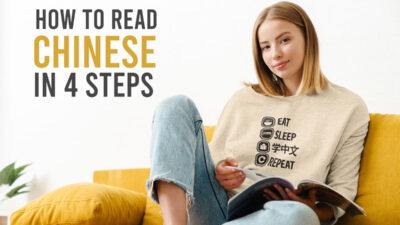 How to Read Chinese in 4 Steps: A Guide for Beginners